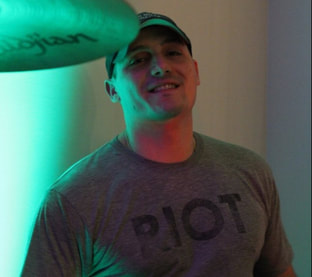 Paul Lanahan began his musical career at an early age, studying classical piano in the Suzuki style, and listening to a wide variety of music while learning songs by ear. Paul is one of five siblings, all of whom excelled in both music and athletics. Talking about his childhood, Paul says, "It would be a rare day in our house if we weren’t going to an athletic event, or a concert, or a show. Someone was always performing something somewhere."
When Paul’s brother started a band and needed a drummer, Paul began playing the drums using an old hand-me-down set. "I instantly fell in love with the drums. I practiced nonstop, playing along with some of my favorite bands and drummers at the time - John Bonham, Alex Van Halen, Neil Peart, Mitch Mitchell, and many others. We played all types of music from The Doors, to Zeppelin, to Hendrix, to Van Halen, to the Police. You name it, we played it." Throughout his teenage years, Paul played drums in several bands, not only learning covers, but also working on original material.
During high school, Paul continued to study classical music and theory, and developed an interest in Jazz Piano, learning tunes from musicians like Scott Joplin, Thelonious Monk, and Marian McPartland. He soon began playing jazz piano in small cocktail venues to hone his improvisational skills. Paul also played soccer and lacrosse in high school, and it was a lacrosse scholarship that eventually brought him to the University of Delaware, where he played for the Blue Hens and earned a degree in Economics. "Playing a sport in College was challenging. It didn’t allow time for much else besides practice and studying, so I put music on hold for a while.”
After graduation, Paul accepted an Information Technology position in the banking industry with the intention of moving into a business career, but the challenges and rewards of working with technology kept him in an IT role, which he still enjoys today. Paul is happily married, and he shares his love of sports and music with his three children, coaching their teams and attending games in his free time.
Paul met Dave through work, and when Dave mentioned he was working on an album of original tunes, and had been banging out drum parts on a keyboard with software instruments, Paul offered to play drums. They immediately hit it off musically, and spent several months recording drum tracks, struggling to find time in their schedules to sneak in recording sessions. Signs of Life was completed in late 2011.
Paul Lanahan is currently busy playing drums and working on new original and cover material with The New Normals.