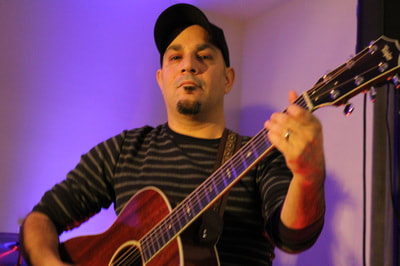 Dominic Musumeci grew up in Swedesboro, NJ, where his early musical influences were Led Zeppelin, Allman Brothers, and Roy Clark. Dominic comes from a musical family, and he started playing guitar himself at the age of 10. It wasn’t long before he was in his first band, Us. Dominic never took formal lessons, but his innate musicianship and broad experience playing in all kinds of formats and styles, combine to yield a performance style that is tasteful and formidable all at once.
Dominic attended Rowan University where he graduated with a degree in Business Administration and Human Resources. While in college, Dominic played in the band Last Minute, and continued to hone his guitar chops and started to build his collection of guitars and amps.
Today, Dominic lives in West Chester, PA, and is actively playing in several well-established Delaware Valley bands. Dominic is married with two boys, and works a day job as a sales representative, and currently enjoys listening to Warren Haynes, Joe Bonamassa, Charlie Star, and Tony Ventura for guitar inspiration. Dominic also loves to collect vintage guitars and amps, and has a collection that has to be seen to be believed.